Yeah. Ignorance is not bliss

Or “Making a difference – keep at it.” Today’s title is nabbed from a MacIver Institute piece yesterday by Brett Healy:

Keeping informed … is more labor intensive than the days when everyone skimmed their jam-packed daily newspaper in the morning, perhaps another one in the afternoon, watched a half hour of network news before dinner and kept an eye on the local TV news before Johnny Carson came on.

But an informed citizenry is a vital component for a healthy democracy. It can be done. One now just has to work a little harder to come by the information.

That has “FoxPolitics News” written all over it! (Of course, I’m completely biased – but if you’re not a subscriber – it’s free! – subscribe here.)...

... in an atmosphere of more and more government intrusion, change (and hope?) can’t come fast enough. Stay informed. It’s our line of first defense – on which we must base our constant, never-let-up actions for change.

Then she adds in the comments:

Right on, Jo! I would only add that FoxPolitics News is indeed free, and worthwhile reading, but this freedom is limited to those with computers and Internet connections. For those who don't have their own, I'd suggest reading this and other sources, on- and off-line, at your local library.

It matters less what changes you want than that you take the time to get informed. "Read, read, read." Get a variety of sources and viewpoints, those that bolster you and those that challenge you. Take the time to learn, and decide for yourself.

This is exactly why free public libraries are essential to decision-making in a democracy. Jo and I may differ on some things, but it would appear that we would both agree with some of our nation's founders:

A democratic society depends upon an informed and educated citizenry.
- Thomas Jefferson

Information is the currency of democracy.
- Thomas Jefferson

A popular government without popular information, or the means of acquiring it, is but a prologue to a farce or a tragedy, or perhaps both. Knowledge will forever govern ignorance, and a people who mean to be their own governors must arm themselves with the power which knowledge gives.
- James Madison

We must each take responsibility for our own informed decisions, if we are to govern ourselves responsibly. Read, read, read!
No comments:

Our library staff has done a terrific job of putting together a Frequently Asked Questions list about our building project. I hope and believe it will answer some of the many good concerns out there in the community. The FAQ is a work in progress and available on our library website.

This really frosts my cake...

The online forums in the Post-Crescent (or any online forum, generally) are not always the place for reasoned debate. In particular, the anonymity of the great majority of those who post using "handles" makes it possible for people to say anything without attaching their names to it --and thus taking responsibility for their statements.

I'll let a lot of the things I read there roll off. I'll usually post -- using my name, natch -- if I feel there are some facts lacking that can be readily supplied. Sometimes I just have to take issue, which is the case when I read statements that appear prejudicial. There were two today:

"food, clothing and shelter are needs-libraries are wants; because poor people"want" a place to hangout i dont feel a "need" to pay for it"

Without even getting into whether education, culture, opportunity and hope are needs (and they are), I felt obligated to speak out on behalf of both poor people and all library users, and posted the following:

There are those who legitimately disagree whether this is a worthwhile project. But it is difficult to accept minimizing the need by belittling those in the community who may be poor or homeless. Yes, the poor, the homeless, the disabled, and the mentally ill use the library.

Many other people use the library in even larger numbers. There are lots of toddlers and babies here every day -- and doctors, housewives, teenagers, senior citizens, judges, business people, students, & mostly just plain folks. It's a place for everyone.

We've had 8,602 people through the doors in the last three-and-a-half days. With this volume of use, this many people, there are occasional problems & all are not solved instantly. But staff and volunteers do a good job of enforcing the basic common sense rule: keep it nice for everybody.

It's a lousy argument to say the library includes people to look down on & thus is unworthy of support.

The Post-Crescent has published a lengthy article based on an interview by Larry Gallup, their Senior Editor for Community Conversation. Larry sat me down with a tape recorder and asked some important and insightful questions.

It's a big decision — and it comes with a big price tag. Should Appleton build a new public library, which a consulting firm pegs at $33 million, with up to $7 million more to handle parking, plus the associated costs of a new building?
Advertisement

The Library Board has endorsed the plan in concept — a 140,000-square-foot building, which would be more than 50,000 square feet bigger than the current library and would be better equipped to handle its growing needs. For the plan to advance, the Appleton Common Council would have to approve the next step, which is selecting a site.

Appleton Library Director Terry Dawson has been front-and-center during the analysis and planning process — and will continue to be.

To provide some insight on where the process has been, where it is now and where it's going, we asked him some questions Tuesday. Here are his answers:...

See the full article here. My thanks to the Post-Crescent for giving so many column-inches to a topic that is important to many and will be a difficult public decision.
No comments:

There's more to design of new library than space

In response to the July 4 letter about the proposed library building, I appreciate Mr. Thiel's acknowledgement both of the need for more library space and the wisdom of a single downtown facility.

But I take issue with some of his points, which appear to be in response to The Post-Crescent's report on a brief presentation by architects, rather than considering the full study.

Mr. Thiel's statement notwithstanding, the architects who spent months designing spaces for a conceptual building program did, in fact, include engineering input and look at many alternatives, including four different design options for expanding our current facility.

While expansion on this site could feasibly address most library concerns, it would not likely be the most cost-effective option for library service in the long run. A crucial concept is that current and future needs are only partly about increased space.

Any design should also address functional needs for increased safety and security, accessible public meeting spaces, improved use of technology, automation of operations, fewer service points and generally more efficient use of staff.

Any design should also be as green and sustainable as possible. Dollars invested wisely up front will be repaid in the long term with more usability and lower unit operating costs to provide more service.

With a project of this magnitude and community impact, we should not be penny-wise and pound-foolish. We encourage community members to read the full report, available at the Appleton Public Library, and at www.apl.org. We look forward to more conversation. 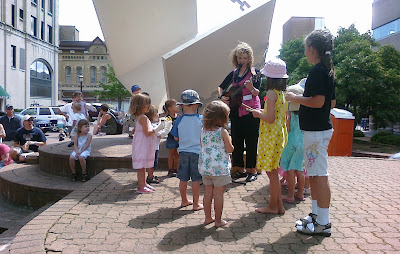 Our Children's staff is doing story hours at the market on three Saturday mornings this summer -- and even without the stories, the weekly market is a cure for the summertime blues (part 5).
No comments:

Cure for the Summertime Blues (part 4)

Pry your kids away from the keyboard and the television, and give them a book. For ideas, here’s a summer reading list....

“In educating myself this spring about education, I was aghast to learn that American children drop in I.Q. each summer vacation — because they aren’t in school or exercising their brains.

This is less true of middle-class students whose parents drag them off to summer classes or make them read books. But poor kids fall two months behind in reading level each summer break, and that accounts for much of the difference in learning trajectory between rich and poor students.

A mountain of research points to a central lesson: Pry your kids away from the keyboard and the television this summer, and get them reading.”