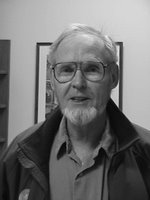 My earliest recollection of Don Churchill is at a City Council meeting in 1978. I was there as a fairly new librarian to try to understand library issues and local politics. Don and Berta Churchill were there as Co-Presidents of the Friends of the Appleton Library, to advocate for construction of a new library facility. It was the first of many times I would sit and discuss library issues with Berta and Don. During their presidency, FOAL led a successful referendum campaign for library construction, resulting in the dedication of the new building in 1981.

For over twenty years, Don was a leader in volunteering his time for the library. In his work with the Foundation, he was able to help the library realize some of the vision Berta had advocated on the Board and in FOAL, helping develop an active adult programming and community development component in library service. After Berta’s death in 2000, Don and his family donated the “Dancing Curves” sculpture that stands outside the library entrance in her memory. He remained a regular library visitor and Foundation supporter. Library staff and supporters, as well as many in the community, were saddened by Don's death this past June. We’ll miss Don as we do Berta, but the gifts they’ve given us will remain and touch lives in this community for many years to come.