Barbara Ehrenreich at the library

It was a wonderful evening at the library, as author Barbara Ehrenreich spoke to an overflow crowd of 400-500 people. This was the culmination of our community read. We were dragging chairs from everywhere to try to accommodate the standing room only group, and working hard to keep doorways and fire evacuation routes clear. This is a happy problem. Clearly, the community read of Nickel and Dimed struck a chord, and clearly the huger collaboration among many libraries and community agencies paid off. A personal highlight during my introduction: when I noted that it was Library Workers Day and thanked all those on our staff who worked to make the evening possible, this got a big round of applause. Not all of us could be there, but I think the public has some notion of it taking an entire staff to do what we do, and appreciates the work.

When Barbara Ehrenreich spoke, she was also warm in praising public libraries and their service to communities, saying:

She went on to talk about her book, her experiences of working in low-wage jobs, and other economic issues. There are some areas of current economic policy that clearly anger her, and she got into some provocative comparisons of rich and poor and the U.S. & other countries. 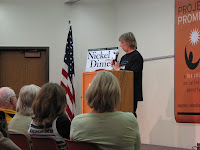 The crowd was generally appreciative and enthusiastic, and the talk was followed by some good discussion as Barbara answered questions.

It was a sweet night for the many organizations which had collaborated in Project Promise, and it sets up an opportunity for additional community dialog when we come together for a follow-up meeting on April 30.

Valerie Magno has posted another account of the evening is on the FVTC Library Blog, and the newspaper account is here.