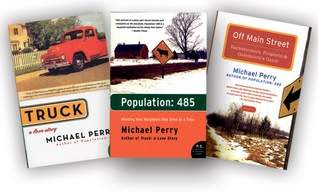 We've kicked off this year's community read, with Wisconsin writer Michael Perry and we got a nice article in the Post Crescent:

APPLETON — Three of best-selling Wisconsin author and humorist Michael Perry's works will be featured in the 2009 Fox Cities Reads.

The public libraries of Appleton, Neenah, Menasha, Kaukauna, Kimberly and Little Chute and the library of the University of Wisconsin-Fox Valley kicked off the third annual community read Thursday at the Copper Leaf Hotel. [entire article here]

We're pretty excited, and had not only the newspaper, but three television stations and three radio stations give us coverage. Rev. Will Bloedow, APL Board member -- and with his wife Ruth, co-chair of the Fox Cities Book Festival -- said:

Every library in the Fox Cities is here today, along with two mayors and a village administrator. This shows a sense of community which our leaders tells us we need badly to rebuild our nation and our world. It's an example of working together to build community and efficiency through collaboration.