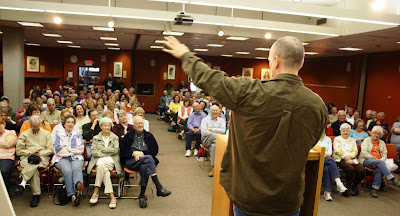 It took a lot of work, a lot of donations and a lot of hours of volunteer time by a lot of people. Every public library, and a lot of the school and university libraries, in the Fox Cities has been involved, along with many other community-minded folks who work for the joys of books, readers and writers. I'm betting we'll do it again!
photo: Michael Perry @ APL. Photo by Michael Kenney

Festival organizers and volunteers can be proud of their efforts - the whole week (and lead-up discussion sessions) was so well-orchestrated and included authors and presentations on such a wide range of interests! (Plus, it was publicized so well that it wasn't possible to blink and miss it.) This fledgling event has learned to fly - I can't wait until next year's FCBF!

BRAVO BRAVO BRAVO to all involved!! It is so exciting to imagine the ripple effect of this wonderful Festival for such a long time to come. Yes indeed it has learned to fly; congratulations to Ellen Kort for the dream adnd to the myriad of pepole who made it all happen. WOW.
Lee Parker