The power of collaboration: Fox Cities Book Festival kicks off

It's National Library Week, and for the third year in a row, it's also the Fox Cities Book Festival. Over the next eight days, 50 authors will appear at 18 venues, including libraries, schools, universities, museums and coffee houses. One of the first is occurring here at the Appleton Public Library, as Kim Edwards, author of The Memory Keeper's Daughter, discusses her writing. 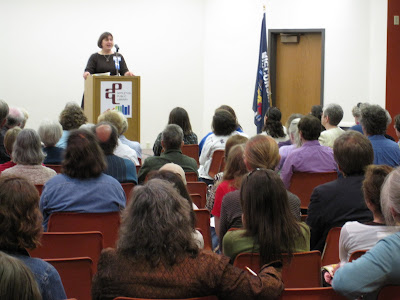 Each year's Book Festival is a huge collaborative effort, requiring a year of prep work. The Board includes representatives of all the local public libraries, plus public schools and higher education, as well as many community volunteers passionate about books and reading. A highlight is always the appearance of the Fox Cities Reads author, who will speak at many different area libraries and schools.

None of this would be possible without both inspiration and hard work. The original inspiration for the event came from Ellen Kort, an Appleton writer and teacher who was Wisconsin's first Poet Laureate. Ellen talked for years with interested people before a committee finally gelled and organized the first book festival. It's now an annual event including committees to do fund-raising, coordinate dozens of volunteers, make author arrangements, organize the community read and market the event. None of this would work without a broad cross-section the whole Fox Cities community, and it's no wonder that our libraries are deeply involved.