Used by permission.
After a spirited discussion at last May's Library Board meeting, our Board upheld staff practices of maintaining our second floor (reference, nonfiction, public Internet) as a cell phone-free zone, while allowing cell phone use on the first floor (circulation, children's, periodicals, media, fiction) and lower level (meeting rooms). This seemed like a workable arrangement -- and a reasonable compromise between those who feel they can use their cell phone any where and those who feel no one should be allowed to use cell phones in the library.

Our practice acknowledges that cell phones are part of people's lives, even at the library, but also that some library users have an expectation of being able to read or study undisturbed. It doesn't eliminate enforcement problems -- there are always some inconsiderate people like the guy in the strip -- but it does manage the situation responsibly. The Board asked us to further study the situation and report back in November. Our Assistant Director, Barb Kelly, presented the following at yesterday's Board meeting. 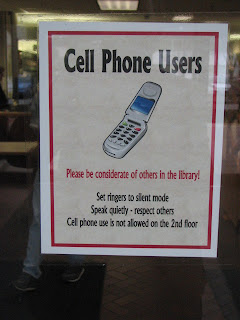 We feel, as you concluded at the May meeting, that this is more of a cell phone user behavior issue than a cell phone issue. We think current practice is properly addressing the concerns.

I appreciate the thoughtful work by Barb and other staff on this issue. Board members had one suggestion: add other languages to the signs. Good idea -- we're on it!