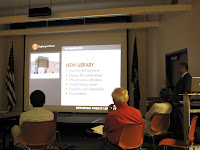 The report on library facility options was presented by Engberg Anderson architects at a Library Board meeting and in a special presentation to the City Council this week. The Library Board has endorsed the report, which calls for a new library building as a better option for Appleton than an expanded building.

The preliminary report, available on the library website, looks at building design options for either an expansion of the present building or new construction. The Post-Crescent did a nice job reporting on the presentation to Council. I encourage anyone interested in the future of our library to read the report.

This takes the discussion into a new phase. The Library Board has asked the Mayor to consider a site selection process for next year. There's a lot of work and discussion that will need to happen before that decision gets made. A few points ...

Amid rather reactionary responses in the Post-Crescent's online forum, there was this small gem of wisdom:

Rather than rapid-firing comments that have little basis, people should become involved in the civic process so they understand that what gets printed in the paper only skims the surface of the careful work that's been done. There is much more to running the city, library and schools than most people can imagine. In-depth planning is done years in advance and when need is anticipated, it is weighed and thoughtfully considered.

The library is many things to many people. It doesn't try to be a 'one-stop' shop, but it does have state standards to meet and a mission to carry out. Chances are, if you don't live in Appleton or use the library building, you have probably had benefit of the OWLS library system interlibrary loan of items from the APL, without having to drive there yourself.

Everyone knows this is a difficult time to consider spending money, but potential library construction is not expected until between 2012 and 2014. Please become informed and THEN discuss.

I'll read the new report and understand what I can from it.

Is there a print copy available even if just for perusal at the
APL?

Also I have a request (as a frequent user) that the public continue to be invited to open events on these matters as were conducted last year.

As an example of new proposals, I recall no mention of underground parking discussed previously at the town hall style meetings.

We're still awaiting the full written report, which we expect by the end of the month. Anything we've received is available at the library.

Of course the two meetings (Library Board and Council) that were held last week were duly noticed and many people attended. But neither was a public "town hall" meeting as was held last year.

This was a presentation of detailed space needs and concepts to address those needs, whereas last year's study was primarily about getting community input to determine facility priorities.

This year's study was intended to develop space and cost options based on last year's study. But I am very confident there will be a lot more public meetings before any decisions are made. We're already talking about when to have another "town hall" type of discussion.

And yes, underground parking was discussed last year. See http://www.apl.org/facility_study_May.pdf (slide 28) or watch the video, if you need a reminder. Not that this is a firm recommendation, but more to the point, library user parking needs have to be addressed one way or another. The recommendation this year addressed the need without making any assumptions about off-site parking.

When it comes to parking the City will need to consider a bigger picture including the library and other downtown needs. But we had to address it within our scope.