National Library Week: Young adult novelist Chris Crutcher spoke to an audience of local librarians at our library yesterday morning before addressing a public gathering later that evening. The author's two appearances at our library were in conjunction with several presentations before high school classes as part of the Fox Cities Book Festival. In introducing him to the evening audience, high school senior and teen library board representative Ryan Nelson said that Chris Crutcher portrays the facts of life as they are, not as they ought to be.

Talking about how he got started telling stories, Crutcher recalled overhearing a locker room story of a coach who instructed his players to injure a talented opponent to knock him out of game. This became part of the inspiration for his novel "Running Loose." The coach's voice - not character - based on his own high school coach. After his novel was published, he returned to his high school back to school, and found out his book was restricted in the school library, requiring parental permission to read, despite his being the only published author in the history of the town. His book was censored because it got into philosophy of sports, and addressed issues of challenging authority.

Crutcher worked at a mental health center in Spokane, dealing with child abuse and neglect. He felt a need to write about the authentic voice of what was happening to abused children. He became conscious of the tension between the need to protect privacy and not share personal stories, versus the need to tell the story of societal problems. He found that due to limited resources, child protection does not protect rich kids, nor anyone over age 11. His fiction pushed the boundaries of young adult literature. Booklist declined to review "Chinese Handcuffs" because they couldn't recommend it. Crutcher started to wonder if he had crossed a line between fiction and real life that should not have been crossed. When a girl in Texas waited a long time to speak with him privately after a school talk, she told him: "When I read 'Chinese Handcuffs', I thought you knew me. I didn't think anyone understood my life." At that point he felt validated, and became more confident he was doing the right thing.

"If you start thinking about what's going to offend people and what isn't, you're not going to be able to tell the story." He related the story of a gay kid, who parents thought he was confused about his sexuality. The kid wasn't confused, but his parents were in denial. The boy told Crutcher the hardest thing in his life was hiding who he was, and knowing he would have to keep hiding at least through high school, asking: "Who wants to be Matthew Shepherd?"Stories are a way out - it's not about a secret, it's about the story. If other people understand the story, you're not alone. It's safe -- there's a place inside a book where it's real.

He related an Iowa book challenge, where a student got up and said to the school board "I'm an honors student with a 3.8 GPA. I could go to any college, but I'm going into the service. Do you mean to say that if I were to come back and write a book about my experiences in Iraq, using authentic voices, you wouldn't let people in this town read it?" That decided the issue.

More statements from Chris Crutcher:
I'm glad we have writers like this, who not only tell a good story but an honest story, who will struggle to help those authentic voices be heard -- and spend time with librarians to remind us of the importance of making sure the stories will reach people who need them. There are stories that need to be told, even if secrets are kept. There are those who need to read these stories. Not everybody has to like it, and not everybody has to read them, but freedom isn't free. We owe it to those children to let their stories be read, even if sometimes we have to fight to keep them on our shelves. Chris Crutcher helps us see the world through their eyes, and that's a start. 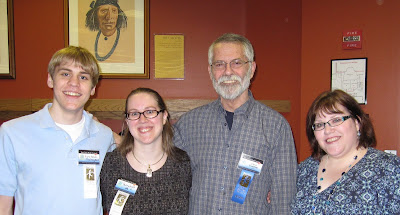 Thanks for an excellent report on Mr. Crutcher's visit. I was one of the fortunate ones who attended his morning presentation that day, and I thoroughly loved it. He is such an engaging and genuine guy, and such a great friend to young people everywhere. Thank God for writers like him, and kudos to all the teachers, librarians, parents, and others who fight to keep books like his on the shelves. He renewed my commitment to keep fighting the intellectual freedom fight.