This is probably somewhere between cool and pathetic.

It was St. Patrick's Day, and our band, Celtic Knot, was a couple hours into a long evening of music at a crowded supper club. Several people in the audience started calling for "The Unicorn Song." Plaintively. Insistently.

Celtic Knot does not do the "Unicorn Song", or we never had. For one thing, it's not exactly a traditional Irish song -- it's a Canadian-Irish emigre band's version of a Shel Silverstein poem. It was just something we've never even practiced. Nevertheless, people really wanted to hear it. As we're taking a break, Gary, the guitar player, says "Gee, that's too bad. I know how to play it -- I just don't know the verses.

So during the break, out comes the trusty Treo. A quick trip into Google produced the song lyrics, and after the break Gary and I found a key. Then he played and I sang it by scrolling through the website and reading it off the screen, since there wasn't enough time to transcribe it. Fortunately, Pete on bass can quickly pick up most things and we all mostly knew the choruses. People loved it enough that we had to do it again an hour later. Plus they tipped us nicely. The "Unicorn Song" has now been added to the repetoire.

I know -- a true geek would have blogged it real time while playing music. The really scary thing is that I've now watched a bunch of people do the dance that goes along with the "Unicorn Song." 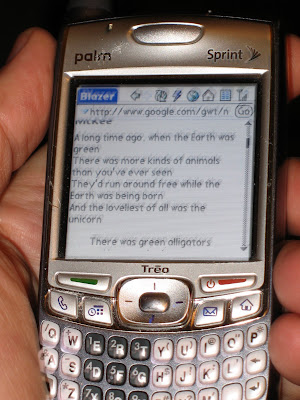 No,true geekiness would have been taping and YouTubing the dancing.

Oh, and where did you dig up that unicorn picture? That's classic PrintShop right there.

It's a weakness of the Palm OS that the phones don't truly multitask, making it hard to read a web page and capture a video simultaneously. Of course, I'm old and I don't multitask either.

As to the drawing, I don't think it's PrintShop. Of course, I'm old and forgetful, but I think I drew that on a Mac for my favorite young adult librarian, back when she was nine years old.